Meet the jewellery designer who has been creating the most A-M-A-Z-I-N-G kaleera s. Every bride is obsessed with kaleera s ( chooda ) — the golden accessories worn on the wrist of Punjabi brides.

So obviously, when actor Kajal Aggarwal tied the knot to businessman Gautam Kitchlu, the actor made sure she customised her kaleera a.

She served a big dose of inspiration for to-be brides with her gold ‘love locked down’ kaleera s, which featured tiny lovebirds carrying twigs made of flowers.

Created by jewellery designer Mrinalini Chandra with the help of karigar s from Lucknow and Jaipur, the eye-catching kaleera s were definitely one for the books.

However, this was not Mrinalini’s first brush with a celebrity client. Earlier she designed kaleera s for Priyanka Chopra and Sonam Kapoor Ahuja’s weddings too.

“I like to create conversations with innate objects and weave a story around it,” Mrinalini Chandra tells Anita Aikara/ Rediff.com .

My first kaleera was for a childhood friend’s wedding, which took place in my hometown, Lucknow.

At that time, I had no idea that this was something I’d take up professionally later.

For the show, I designed a bridal kaleera with several tiny chairs and tables. The idea was to depict a party scene.

The finale look for model Kanishtha Dhankar was inspired by my take on traditional jewellery including the mangtikka , haar , anklets and kaleera s.

Everything mundane and ordinary inspires me. I try to find something interesting in it.

I like to create conversations with innate objects and weave a story around it.

Putting together an abstract concept each time is pretty challenging, but I truly believe that God is in the details.

Kajal’s kaleers s are my recent favourite, especially because she is such a wonderful person.

She trusted us and gave us full creative freedom.

Her kaleera s were intricate yet elaborate. She wanted them to include her husband and her initials, tiny birds, flowers and pearls, so I wove a story around it.

The domes were beaten by hand, and made in Lucknow.

The initials and love symbols were made by our veteran karigar s. We also used stunning ivory fresh water pearls.

It took almost over two months to put everything together, but we were glad they way it turned out. Kajal was very happy. For that we thank Priyanka Chopra’s stylist Ami Patel, with whom we had been working on many projects.

Customising Priyanka’s kaleera s was the most amazing experience. It was an absolute dream come true for us.

Her kaleera was about Nick Jonas and her beautiful love story and were customised to the tiniest detail. Sonam has been my muse since I made my first piece of jewellery, even before I showcased at Lakme Fashion Week.

She has worn my jewellery on several occasions and I absolutely adore her.

When I heard she was getting married, I sent her our signature peacock kaleera s as a gift from us on her wedding.

The peacocks kaleera s, handcrafted in Lucknow and Jaipur, were entirely made by hand without any machines involved.

It’s the most eco-friendly way of production and all our signature motifs are made like that.

I was happy to make them for Sonam as she is the kindest, most genuine and gracious person I have known.

Many weddings are taking place during the lockdown. However, now people are choosing to spend on themselves rather than on lavish weddings.

My team had to quickly prepare for the massive rush of the wedding season. However, we managed thanks to our karigar s, who are the backbone of our handcrafted business.

For us it was challenging to figure out a long distance work system, but we all had to adjust quickly to the present circumstances.

A celeb you’d love to see wear your kaleera s.

Your most memorable kaleera s.

Definitely, it has to be the one I designed for Priyanka Chopra. I would also like to include my very first kaleera . 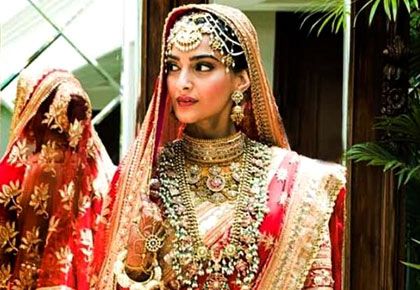 Why Sonam Kapoor, Priyanka Chopra love this woman have 817 words, post on www.rediff.com at November 18, 2020. This is cached page on Health Breaking News. If you want remove this page, please contact us.