BEIJING  — South Korea and China each reported hundreds more virus cases Thursday as the new illness persists in the worst-hit areas and spreads beyond borders. 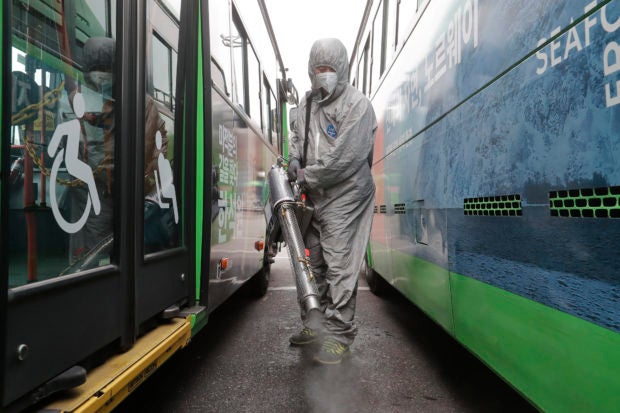 A worker wearing a protective suit sprays disinfectant as a precaution against the coronavirus at a bus garage in Seoul, South Korea, Wednesday, Feb. 26, 2020. The number of new virus infections in South Korea jumped again Wednesday and the U.S. military reported its first case among its soldiers based in the Asian country, with his case and many others connected to a southeastern city with an illness cluster. (AP Photo/Ahn Young-joon)

South Korea reported 334 more cases, bringing its total to 1,595. Most of the new cases were in the country's fourth-biggest city, Daegu, where the outbreak has hit hardest and the national government has mobilized public health tools to assist the region's overwhelmed medical system.

But there are signs the virus is spreading further in South Korea with 55 cases reported so far in the capital, Seoul, and 58 in the second-largest city, Busan.

China reported 433 new cases along with 29 additional deaths on the mainland. Thursday's updates bring the country's totals to 78,497 cases, and 2,744 deaths.

Of the new cases, 383 were in the epicenter of the city of Wuhan, where the virus first emerged in December. Wuhan also accounted for 19 of the new deaths.

Global worries about the COVID-19 illness were multiplying, as the epidemic expanded geographically and for the first time caused more new cases outside China than inside the country. With Brazil on Thursday confirming Latin America's first case, the virus has reached every continent but Antarctica.

"The sudden increases of cases in Italy, the Islamic Republic of Iran and the Republic of Korea are deeply concerning," WHO director-general Tedros Adhanom Ghebreyesus said Wednesday.

For more news about the novel coronavirus click here. What you need to know about Coronavirus.

The Inquirer Foundation supports our healthcare frontliners and is still accepting cash donations to be deposited at Banco de Oro (BDO) current account #007960018860 or donate through PayMaya using this link .