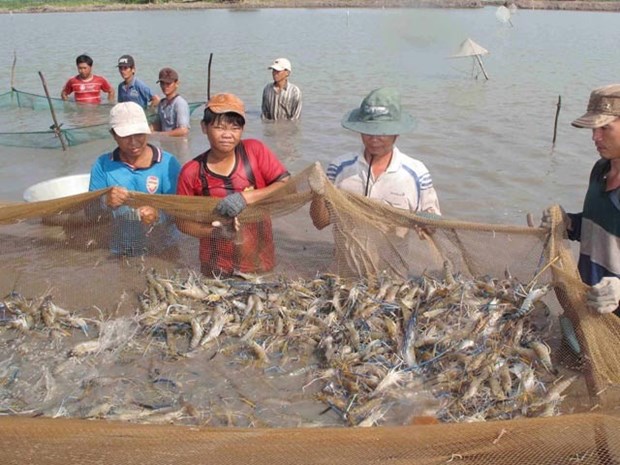 
HCM City (VNS/VNA) – Provinces and cities in the Mekong Delta have set ambitious targets this year with a focus on high-quality agriculture combined with eco-tourism , services and industry.

The province produced more than 4.2 million tonnes of rice in 2018. At least 76 percent of high quality rice was exported, he said. The province's aquaculture yielded about 815,400 tonnes, exceeding 4 percent of the plan.

It welcomed over 7.6 million visitors, of which international visitors were 580,000, exceeding 34.8 percent of the year's plan, he added.

Nguyen Van Duong, Chairman of the provincial Dong Thap People's Committee, said that export turnover of the province reached a record 1.2 billion USD last year, a surge of over 40 percent compared to the previous year.

The province sent more than 2,000 people to work overseas in Japan and the Republic of Korea, higher than the target of 1,000).

In addition, in 2018 Vinh Long province achieved 10.59 trillion VND (456.3 million USD) worth of agricultural production, according to the provincial People's Committee.

The province's investment environment improved with 22 new projects with total registered capital of 5.89 trillion VND (253.8 million USD), up by 10 projects over the same period.

The number of tourists to Vinh Long also increased by more than 8 percent over the previous year.

Income per capita in Tien Giang increased to 47.6 million VND last year, exceeding the set target, which was higher than the average of the entire Mekong Delta region.

The province plans to enhance cooperation activities among other localities in the region to develop its trade, service and tourism sectors.

Vinh Long will continue to restructure agriculture with the building of new rural areas, and focus on building value chains for production and promoting major agricultural products.

The provincial Kien Giang People's Committee plans to improve the quality of human resources and administrative reforms, promote investment in major transport infrastructure, and develop Phu Quoc island district as a special economic zone and driving force of the province.

Kien Giang will also continue to restructure the agricultural sector with a focus on building new rural areas, and issue more incentives to attract investment in clean and organic agriculture.

The province will enhance investment promotion and recover delayed projects or those that have been implemented slowly.

Kien Giang aims to achieve a growth rate of more than 7.8 percent, the top figure in the Mekong Delta region.

In addition, Soc Trang will also improve its business environment and promote agricultural development with linkages to value chains, with priorities given to clean rice and aquatic products, use of high technologies, and promotion of tourism and renewable energy.

Soc Trang targets a growth rate of between 7.3 percent and 7.5 percent this year, with income per capita of more than 42 million VND.

It will continue to reduce the rate of poor households in the Khmer community people to 3-4 percent per year.

Vo Thanh Thong, Chairman of the Can Tho City People's Committee, said Can Tho is playing a major role in the Mekong Delta in many fields such as education and training, healthcare, science and technology, industry, trade, services and tourism.

Can Tho will continue to reform its growth model, restructure the economy towards sustainable development, and promote administrative reform, as well as create more favourable conditions for local and foreign enterprises to operate effectively. Can Tho will also promote a knowledge-based economy.

Mekong Delta aims for high-quality agriculture in 2019 have 815 words, post on en.vietnamplus.vn at January 18, 2019. This is cached page on Health Breaking News. If you want remove this page, please contact us.